Eriksen and players collapsing on the pitch. 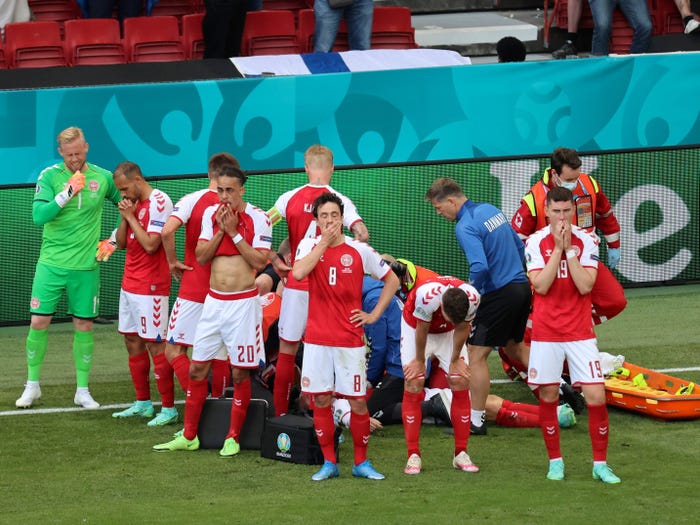 Christian Eriksen is no doubt one of the most talented playmakers of his generation. For almost a full 60 minutes, the entire football world looked on in horror at what they were witnessing during the Denmark v Finland match. As he lay on the pitch, completely lifeless, teammates encircled him and medical professionals administered CPR.

The latest news is that Eriksen has issued a short and interesting statement from his hospital bed.”Thank you, I won’t give up. I feel better now, but I want to understand what happened”, he said.

So what did happen? Denmark’s team physician stated that Eriksen suffered from a cardiac arrest and that for a while he was technically dead, before receiving the emergency medical treatment which saved his life. However, other people have been warning about this for some time now. Just back in April of this year, Manchester City boss, Pep Guardiola hit out at UEFA and FIFA. According to Guardiola, many European clubs have had to endure a brutal schedule of back-to-back games, due to the global pandemic and it is too much for them. In a statement, he said, “UEFA, FIFA kill the players. It’s too much. We didn’t have one week off since we started [the season]. Not even one. No player can sustain this. Not just physically, but mentally, to be ready every day to compete against opponents to win the game. It’s impossible.” Guardiola’s words have turned out to be prophetic.

However, this event is by no means a one-off, and Eriksen, despite technically dying, was lucky in comparison to other footballers who have collapsed on the pitch. In June 2003, Cameroonian player Marc Vivien Foe collapsed in the center circle during a game against Colombia. He later died. Recently, Antonio Puerta died at 22 after collapsing. Phil O’Donnell, captain of Motherwell also collapsed and died in 2007. Unfortunately, there are many others.

All these deaths and what happened to Eriksen have one thing in common; cardiac arrest. Should the powers in football be doing more to stop the kind of events that happened to Christian Eriksen, just before halftime in Copenhagen?

Turkey, is it you? The real dark horse of EURO 2021.
Group Stage Review